BLACK PINK Wiki
Register
Don't have an account?
Sign In
Advertisement
in: Square One, Square Two, Square Up,
and 4 more

This page contains a list of awards and nominations received by BLACKPINK, including, to name just a few, the awards won by "Whistle" (awards such as the song's topping of the digital, download, streaming and mobile chart of Gaon Chart of August 2016, earning them Best of Next Artist Award and Best Music Video in Mnet Asian Music Awards, and Best New Artist in MelOn Music Awards) along with many others. 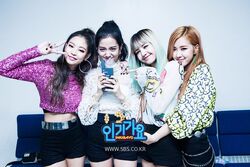 The MTV Millennial Awards (MIAW) is an annual Latin American music awards show presented by MTV (Latin America) to honor the best of Latin music and the digital world of the millennial generation. BLACKPINK have received 2 nominations.